My involvement with Harvest Time began in 2002 when I joined their first small circle, the Beloved Community. One aspect of our work together was to openly share the details of our investments and bank account balances, our giving and portfolios. Most of us were proud of at least some of our investing and spending choices and embarrassed by others, but we discovered the freeing power of taking these details out of the closet and looking at them with spiritual friends.

Following Harvest Time’s encouragement, the Beloved Community experimented by working with all that emerged as we brought our money decisions out of the privacy of our own homes and into community. In one of those experiments, we each determined how much we wanted to donate. Then we all decided together where to give the money. We each had equal say in the decision even though the amounts we contributed varied greatly. As expected, this brought up conflicting emotions. Talking about the emotions stirred by these experiments, however, proved to be a powerful way to bring our finances in line with our faith.

Four years after I joined Harvest Time’s Beloved Community, two of our members came to our 2006 fall gathering ready to give away their family farm in Mississippi, a farm filled with both wonderful family memories and cultural pain. They hoped that the Beloved Community would work collaboratively to give the land away to an organization in such a way that would bring healing and reconciliation. We had practiced communal gifting before. To some of us, it appeared that this might be our next giving experiment.

After breakfast on our last morning together, we all headed down to the edge of the Pacific Ocean for our closing worship together. These rituals were often a mix of sacred play and prayer, and this morning was no exception. With the waves quietly lapping at the shore, we were presented with a hand drawn Deed of Trust. We were silent for a moment, marking the moment the farm was spiritually given to the Beloved Community. Legal transfer to Harvest Time happened a few months later. 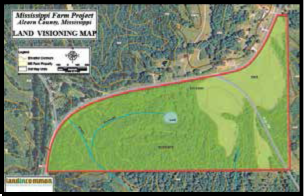 As we received the deed, I felt the sands shift under my feet and the Spirit flow into the midst of our circle. I knew that we had just begun a process of giving and receiving that could initiate healing far greater than I’d ever imagined before.

Maybe, just maybe, I dreamed, this band of seekers could give away land located in a particularly violent and racially divided part of our country, historically and currently, in such a manner that the process itself would encourage sustainable partnerships across the big divides of race, class and gender.

I glimpsed that this process could initiate a flow of healing that would touch my friend’s ancestors who had lived on and loved that land, our divided nation and our world. If we followed the guidance of the Spirit each step of the way, this gift could become a profound doorway to spiritual transformation at the personal, communal and systemic levels. When asked who among us wanted to participate in this process, I said yes with every cell of my body.

I’m glad I didn’t know that receiving ownership of this land was only the first step of a very demanding nine-year process. That day, though, standing on the edge of the Pacific Ocean in a circle of friends, all that mattered was the gift that had been freely given and received.