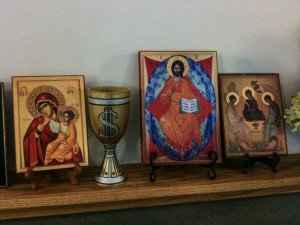 As a young adult, I treated giving like paying bills. When requests for money came in the mail, I placed them in a pile with my bills. Once a month I sat down to write checks and sent off a few to non-profits as well.

That was before I was able to deal with the money that had come to me as gift when I graduated from college.   Since I was not sure what to do with what felt like wealth to me, I spent many years pretending it was not there and living on my teacher’s salary.

When Don McClanen and The Ministry of Money came into my life, I knew that it was time. I participated in retreats on biblical economics and journeyed to Haiti and Bosnia in order to open my heart to what was happening in the world. A few years into our work together, Don sat me down and asked for a gift of $50,000. I laughed when he asked. How much money did he think I had?

In reality, I could have made a gift like that. But I was not sure that’s what God or I desired. Even so, Don’s question helped me to see that my capacity to give was much greater than what I had previously believed.   I sat with the request and eventually took a leap and made my first large gift.

Over time, I became clear that my attraction to simplicity was part of my vocation and I decided to reduce the amount of money I held onto in savings.   I made several large gifts until I came to a point where I felt I had enough.

I learned a lot during that season of gift-experimentation. Some of my best teachers were my mistakes.   I made gifts, for instance, that flowed from a sense of guilt, a belief that I could fix others or “to get someone off my back.” There were also moments of grace – like the time I offered $1000 to help a man build a house in Haiti. He needed $2000 and unbeknownst to me another friend also offered $1000. The synchronicity of that man receiving exactly what he needed through no planning on our part opened my eyes to the way God can move through the flow of gift.

Those gift experiments also helped me to become much more intentional about how I give. I stopped writing checks to organizations I didn’t really know, for instance, and decided to give to places and people where I already am or want to be in relationship. I focused my giving on organizations dedicated to shifting consciousness because I believe conversion is necessary for real social change. I made gifts to help friends meet their basic needs. I practiced giving as part of communities with people from diverse backgrounds. Having come to experience a more mystical side of God, I set aside money that I could give in response to a “Holy Spirit nudge.”   In short, I tried to align my giving with my vision and sense of call.

In practice, this looks like five envelopes on my home altar. Every month, when I get paid, I take out cash and divide it between the envelopes, each of which bears the name of an organization, a person or the Holy Spirit. I also collect spare change in a jar that my son put on the altar years ago with a prayer that God would help children who are hungry.   I place the money in my place of prayer to bless it until it is time to send it off, to remind me that something sacred happens when I make a gift.

Sometimes, I wish I still had the ability to make large gifts that could fix a need or help an organization make a shift.   It is tempting to think that because I cannot give a lot, my gifts don’t really matter.

But I know better. About a year ago, an older woman in my church who often tells me how grateful she is to know there are wealthy Christians who are trying to do something different with their money started sending Harvest Time $5 per month. Every time I receive her gifts, I feel that our work is blessed. She reminds me that the power and spirit of gift has nothing to do with the zeros. 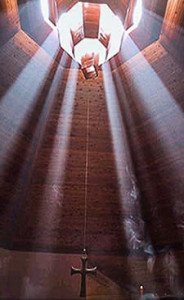 That question led me to shift my focus in giving and pay attention to where I sense God’s love present. I worry less now about impact, though I know that is important from a certain point of view. These days, I am more concerned about giving as a way of participating in Christ’s presence in the world.

When I give this way, I notice that the gift tends to overflow, flowing in multiple directions at once. Sometimes it is tempting to think about giving as a one way flow from someone who has, giving to someone who needs. But when I am honest with myself I see that is not true for me. I give to people and organizations that I know can change the world because I sense the power of their charism at work in me.

It’s like what happens at the communion table. Some hands bless and offer. Other hands receive and say “Amen.” All of us together stand in the mystery of God’s grace. And all of us are fed.

That’s how I am thinking about giving now. As Holy Eucharist — Thanks-giving.