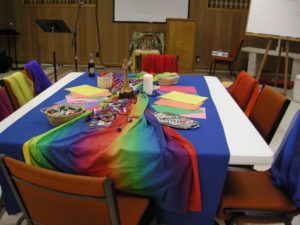 What you need to understand about me before I tell you this next story is that I was taught to lead with my mind. A product of private schools, I understood how to navigate the world of big ideas and loved it. Philosophy, theology, literature, and history were my favorite subjects all the way through graduate school. That is why, when confronted with the problem of systemic injustice and the fact that my money was tied up in it, I went first to the mind. I studied the prophets and liberation theology. I learned biblical criticism to try to figure out what Jesus meant when he talked about money. I read books about simplicity and investing with values.

But relying solely on the mind was not enough to set me free.

In the fall of 2001, I was teetering on despair. The attacks in NY had shaken my faith. A friend was facing death threats in Haiti.   I was not sure how to hope in a world where evil seems to prevail sometimes. I was working hard to try to figure how to believe when a friend invited me to come play.

“Come as the part of you that never gets to come to the party of life,” was the invitation I heard on a Harvest Time retreat. In the room there were costumes, music and art supplies. I did not get it at first. What did this have to with money and Christian faith?

I was not sure what to do, but I wanted to be polite, so I put on a blue wig and a sequined robe and came up with a name for my “character.” I felt incredibly awkward, but was profoundly amused watching everyone else. The people I was with were creative and very, very funny.

A few months later, on another Harvest Time retreat, the invitation to play came again. Gospel music was playing. The costumes were out. The invitation this time was to “come as the part of you that never gets to come to church.”

I knew exactly who I wanted to be.

I was in the final year of my Masters of Divinity program then. At the end of the academic year, the men in our program would be ordained and the women would need to get creative about how to make a living in the Roman Catholic Church. I chose my costume quickly and easily, dressing as a beautiful woman with long red hair and a leopard skin skirt. I was coming as my inner priest.

I realize that might not be your image of a priest and to be honest I did not know it was mine. But there she was – this woman who was very clear about who she was and what she wanted to do – in my body.

At one point, this woman, this part of me, announced that she was there to give the sermon. Everyone looked to me, so I stood up even though I had no idea what I was going to say. Slowly, in silence, I moved through the circle and with each friend offered a simple gesture that I hoped would communicate my love for that person. When I was done, I said simply, “And the word was made flesh and dwells among us.”

Afterwards, I wondered who this woman was who knew her own beauty and knew the sacred dimension of gesture and touch. Who was this woman, in me, who knew something about divine mystery in her own flesh? 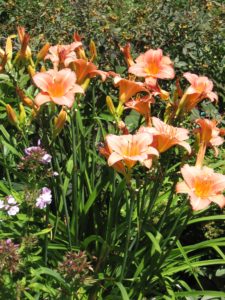 I was stunned by the emergence and clarity of this part of me. After that retreat, I spent quite a bit of time trying to understand who Lily was.

Before that time, I would have said that I believed in God – most of the time. But I was a bit like the man in the Gospels who cries, “I believe. Help my unbelief.” (Mark 9:24) I tried to work with my doubt by learning more. I searched for God “out there.”

Lily changed that. With Lily as my guide, I learned to shift my attention to what was happening in me. I began noticing how love shows up in my body. At the time, I was a young mother. So much of my daily life was about offering love through my body. My children knew that I loved them because of the light in my eye, the excitement in my smile, the song in my voice, the gentle holding of my arms, and the milk in my breasts. There was nothing intellectual about the daily work of maternal love. It was profoundly embodied.

But I had not seen the movements of my life as a mother as a spiritual practice until that playful ritual. Then I started noticing and savoring the presence of love in my own body. What I saw was that my life was moving inside of a current of love that sometimes was in me and that often was moving toward me.

Sunsets for instance became a daily prayer. Any time the lights of the evening sky caught my attention, I felt as if I could hear God speaking directly to me, “You are beautiful. Your eyes are like doves.” (Song of Songs 1:15) I was like a newlywed falling into the love of God which was suddenly obvious everywhere.

This awakening to divine love was a key dimension of the shifting of my relationship with money. Once I could sense and relax into the love that is all around me, I could relax my hold on the money that I clung to for security. Once I realized that I already knew how to express love through my body, I could see that the money that flows through my hands can also be an expression of love.

Lily opened a door in my heart that shifted the way I was asking questions about money. No longer was I focused on fulfilling an ethical obligation. I began to look for ways that money can participate in the dance of divine love.