I visited the farm in mid-November 2006, as the last of the leaves were falling from the many hardwood trees in the forests that stretched over the hilly land of northern Mississippi. It was very chilly, with clouds gathering throughout the day, although the rain never fell. 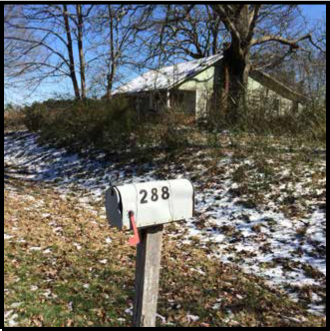 My traveling companions and I had driven from Memphis and, as we turned north toward Tennessee from U.S. Highway 72, I was struck by the immediate changes of sight, sound, and feel. It was as if we had been transported somehow into a bygone era, and time suddenly slowed. The sound of the highway faded behind us as we wound our way over a curved road, past a wide variety of houses and other rural buildings. Some were neat, tidy, and well cared for, while others were derelict.

As we drove along, my friend suddenly announced that we were now crossing land that was a part of the farm. The trees were thick and overgrown, but beautiful, an intermingling of dense evergreens and deciduous trees. Soon we came upon the old farmhouse. The house was not in good shape, but its simple beauty captivated me.

Since the house is on the high point of the land, the view to the east is exquisite, and the land rolls on and on in all directions. A cacophony of bird greetings met us as we explored the yard. Small groups of redbirds darted from one hiding place to another as we strained to see them up close, to no avail. A few giant oaks towered above us.

In the midst of such beauty, I also heard, in some mysterious way, the land offering up another story. It was a story of the human experience, and it held it all- violence and tenderness, petty meanness and doing great good, living in a broken and gloriously beautiful world. The paradox was all around me; it was all here, and it all needed to be heard.

And what of its earliest occupants, those who had lived in this place for millennia, driven off to make room for the newcomers from across the ocean – my ancestors? What we now call land the Chickasaw and Choctaw people called yakni. Was I hearing native footsteps as I trod upon this sacred yakni? Did I scoop up atoms that had been the blood and sweat of their ancestors as I knelt to examine the soil? The echoes were silent and deafening.

I wondered, what would it be like to leave this land alone, to allow the Mother to heal Herself here, without interference? Then, what if people of good will, reverence, and clear intent could assist Her in that work, to re-establish a life-giving relationship between modern day Two-leggeds and Redbird, Crow, Hawk, Deer, the Standing People, the soil and water, the body and blood of the Mother? Could the sweet memories be celebrated, and the echoes of grief and loss be redeemed? Would anyone be willing to stand in the silence of this place and bear the awful and awesome burden of hearing? It must be done in places like this, if there is to be hope anywhere.