On our first morning in Rwanda, we drove through the bustling streets of Kigali to the Genocide Memorial Museum. There we walked from room to room learning of the horror that unfolded over 100 days in 1994. Given the current peace, order, and prosperity of the city was hard to believe that the terrible scenes captured in the images and artifacts before us had unfolded on the streets we had just driven a mere twenty-five years ago. In many ways, the genocide felt like a piece of dark, yet distant history. That notion would soon change.

People began to arrive for the Wisdom & Money retreat, and although I was aware of the fact that these were people who had perpetrated and been victims of genocide, this understanding was purely intellectual and I could not fit it to the reality in front of me. I guess I expected there to be something that would distinguish these people, indicating the horror they had been through. There was not.

As we sat eating dinner, Philbert pointed out a man and a woman who were eating and drinking together. They were 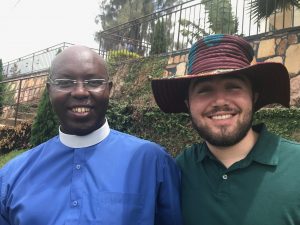 clearly friends. I watched them talk and laugh with smiles on their faces. Philbert then told us that the man was a genocide perpetrator. He pointed to a scar on the face of the woman and matter of factly told us that the man she was sitting with had cut her with a machete, causing this very scar. Although I understood what Philbert was saying, and I had even been prepared for the fact that a very powerful reconciliation often took place in the work that Philbert did, the scene before me did not make sense. I did not really believe what I had been told about reconciliation taking place in Philbert’s work until then. It is one thing for a perpetrator to ask for forgiveness and be forgiven by the victim, but the friendship between these two individuals was beyond what I imagined was possible. How could such genuine love and affection exist there after such evil actions?

Later in the retreat, Jean Claude and Claudette shared their stories. Jean Claude told of being a young policeman during the first stages of the genocide and how an order had come down instructing them to kill people who came to the police station seeking safety. Those who refused to kill were killed. Fearing for his life, Jean Claude joined in the slaughter. Claudette shared a horrifying and awe inspiring story of her survival. Their accounts of the genocide were stunning and remain imprinted on my mind. But their story did not end with the events of the genocide. Nothing can capture what it was like to look into their eyes and hear their voices as they shared the stories of how they healed. All I can do is encourage you to go for yourself and hear their stories, and the stories of people like them.

On the last day, we sat at a large table eating lunch with Jean Claude and Claudette. Through a translator, Jean Claude asked, “Now that you know my story…what do you think of me? Do you still see me as a killer?” I was taken aback and did not know what to say. Thankfully, somebody else answered, saying that although what he had done was evil, his humanity and goodness were still clear. And this was true. There was nothing in Jean Claude’s eyes, words, or demeanor that held any kind of evil.

Soon after, Claudette turned to me and spoke directly to me. She emphasized that I must bring these stories and the possibility of reconciliation after the worst horror imaginable back home, since most of my friends would never get the chance to go there. She made it clear to me that I must understand that the acts of others that cause me anger, pain, and even hatred are never unforgivable and I must help those around me see this too. If I allow what has been done to me to create hatred in my heart, I am no better, and ultimately that hatred will manifest itself in the world again. This is not to say that I should forget the acts of others that cause me pain, but I should always leave the door open to healing, and know it is possible because it has happened in Rwanda. The words of these two people, and the reality of complete and total reconciliation between them have left me changed.