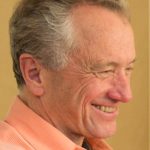 One morning sometime in the mid-1990’s, at the Parish of St Clement, Honolulu, where I served as Rector, I stood from my prayer desk and looked out at the empty sanctuary.   I looked at the pews and prayer books and realized that this form of church which was so dear to me, in which I had been raised and which I had been trained to lead, was passing away. In the same moment I became convinced that a new form of church would emerge in its place.  I wanted to find it.

My quest led me in time to Mukono, Uganda, in 2008, where Brian McLaren and Claude Nikondeha welcomed “emergent” church practitioners from Western nations and “holistic mission” church leaders from East, Central and South Africa to the first Amahoro gathering.  “Amahoro” I understood to be the Kirundi version of “aloha,” a greeting of love and peace.

At this gathering I met the Rev. Philbert Kalisa, Executive Director of REACH-Rwanda.  He was the only other Anglican priest at this gathering of leaders chiefly from independent churches.  He spoke with me about his ministry of post-genocide reconciliation in Rwanda.  He was so genuinely humble in his response that I had a hard time believing that he actually was leading the work that he described.

Our acquaintance turned to friendship the following year when Philbert hosted the second Amahoro Gathering in Kigali, Rwanda.  Claude Nikondeha invited Philbert and me to preside at the conference Eucharist.   As Philbert and I planned the worship, we were of one mind in incorporating silence in place of a sermon and Taize chant in place of a praise band.  We disagreed, however, on the issue of garb.  I said that I did not feel comfortable wearing a clerical collar in that ecumenical setting; he said that he would not be comfortable without it. 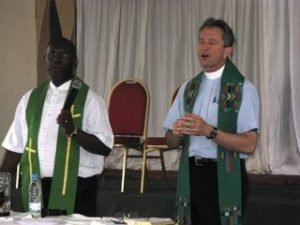 I had second thoughts, and out of respect for Philbert I showed up the next morning in a clerical shirt and collar I borrowed from Jeff Gill.  Claude met me at the door.  “What are you doing in your collar?” he asked.  I explained.  “Philbert is not wearing a collar,” Claude said.  “He told me he did not wear it out of respect for you.”

At the end of the Gathering, Philbert and I led a group of Westerners, including my Boston Circle comrade Caroline Marvin, on a pilgrimage to genocide memorial sites.  Outside the Murambi memorial, where 2700 were murdered, we sat in a circle on the ground in the shade of a tree for twenty minutes of silence.  Then we attended the graduation of REACH’s Nyamata women’s circle.

Philbert explained that he was not bringing us to the event so that we might become supporters of REACH – though we were welcome to do so.  He brought us so that we could see what God was doing in Rwanda.   He hoped that we would return home to become ministers of reconciliation in our own places. 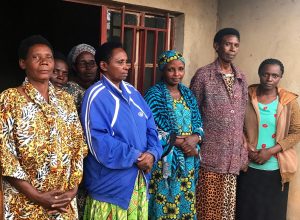 I was dazzled by what I heard at the graduation.  Youth groups sang and danced to songs that they had created together calling others to join the work of reconciliation.  A dozen women, some survivors of the genocide, some wives of imprisoned perpetrators, had participated in a reconciliation training.  “At first,” one woman stood and said, “we could not even look at one another.  Now we are embracing one another and kissing one another.”

After the ceremony the women shared with the pilgrims their intention to continue together as a Unity group.  They had decided on a shared activity that would support their continuing unity: they would create a soapmaking business together.  In this way they would earn money to buy food to feed their children.  When Caroline and I returned to the Boston Circle, our friends were eager to join in a partnership with the women in Nyamata. 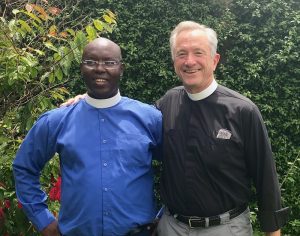 At the personal level, my friendship with Philbert has developed into a partnership in support of reconciliation in Rwanda and the US.  I have slept in Philbert’s home, and he in mine.  I have shared with Philbert what it means for me to have an African partner, and he has shared with me what it means to have a US partner.  Together we have led conversations at Amahoro Gatherings on moving money within cross-cultural mission partnerships.  I remember the look of disbelief on the face of one Ugandan leader in these conversations.  She organized rural widows for economic opportunity and had written to a foundation in the US for financial support. When I said that her application would be read by a staffer and that the actual donor may not personally be involved, she was scandalized.

After Elisabeth and I arranged a loan to REACH-Rwanda from our US donor advised fund for the construction of a conference center, Philbert spoke in Manhattan to a group of US impact investors.  REACH envisioned building the center on land it acquired in the immediate aftermath of the 1994 genocide.  The land had comprised the hilltop estate of a Rwandan Anglican bishop who chose not to remain in the country when the genocide was brought to an end.  The conference center would provide a revenue stream to support REACH’s work of reconciliation.  This would replace the flow of financial from British and US donors that, twenty years after the furor, had dried up.

The loan was issued by Impact Assets, the trustees of our donor advised fund.  They made the loan as a program-related investment once it had determined REACH-Rwanda to be the foreign equivalent to a US public charity.  They were able to negotiate an interest rate with REACH that, even when adjusted for high risk, was still significantly lower than what was available to REACH through commercial lenders in Kigali.

On April 12, 2016, Impact Assets and Veris Wealth Management Partners invited New York investors in their networks to meet Philbert.  In a Wedgewood-blue function room at the Pierre Hotel, Philbert said that many local mission-oriented, faith-related NGO’s in Rwanda could become self-sustaining if they were given access to the capital they needed to create revenue-generating enterprises.  The Rwandan national government encouraged such initiatives.  I could not help thinking of the hundreds of billions of dollars accumulating in US DAF’s with no place to go. 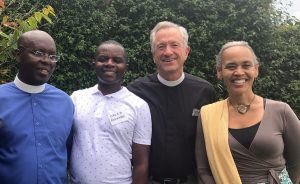 In pre-Covid years within our organizational partnership Wisdom & Money twice sent teams to Kigali to gather with REACH members for contemplative retreats.  Philbert has also preached, taught and led retreats in the US.  Through its relationship with Philbert and REACH, Wisdom & Money is exploring what it means to move money in the flow of Spirit within a vision of Unity held by a reconciling community.  What could that mean for us in our own communities?

Looking back, I’m struck by the fruitfulness of the partnership, but I didn’t step in without trepidation.  I encountered fears I’d never known, especially at the point of moving money.

In short, how am I in this partnership?  Would I respond passionately for a time and then withdraw, risking little of myself?  The conventional model of philanthropy protects my privilege to do exactly that.

Fears arose as I assessed the risks and benefits of moving money to support REACH’s work. There were voices of self-doubt:  What did I really know about international cross-cultural mission partnership?  How would I build in the necessary structures of accountability? Where were my measurable outcomes?  I might do more harm than good by my well-intentioned meddling.  There were also suspicions:  If I were to give money, how would I really know how it was spent?  What did I really know about my partners?  There was also self-critique:  Am I playing the hero in a white savior drama?  Am I creating dependency?  Will the work I support prove to be financially sustainable?

The fears persisted as long as I cast Philbert in the role of a supplicant for my generosity.  I felt torn.  The best practices of progressive philanthropy seemed to be rooted in separation and fear.  They left me feeling cramped and cold.  And yet, why did the idea of giving freely leave me feeling so vulnerable?

When I imagined committing myself to full partnership with Philbert, an inner alert warned me that I was in danger of piercing some kind of shield that had protected me.  Would I really implicate myself in the legacy of violence in Rwanda? Did I really want to cross that line?  Would I voluntarily give up my invulnerable separation as donor from afar?  Was I willing to share even minutely in the vulnerability of my friend in Rwanda?

In short, how am I in this partnership?  Would I respond passionately for a time and then withdraw, risking little of myself?  The conventional model of philanthropy protects my privilege to do exactly that.

Conventional philanthropy defines a partnership in the terms of a transaction: what is to be given by one party, and what is expected from the other party in return.  When the term of the transaction is complete, the parties return to their corners; nothing in their relationship to one another needs to have shifted, grown or changed in any significant way. 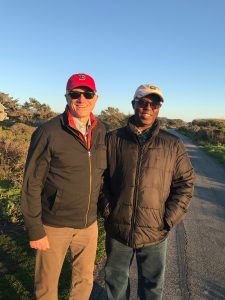 I imagine for myself a partnership within which Philbert and I will continue to visit and to listen deeply to one another.  I imagine continuing to draw strength from what I see in Rwanda and insight from what I hear there.   I want to continue to be inspired to live differently in my own world.

I look forward to continuing to develop this partnership into one that will summon up something new in me as we participate together in bringing forth something new and powerfully human into the world.

Despite the sincerity of this profession, I acknowledge that my relationship with Philbert and REACH remains one in which I am engaged only infrequently in my daily life. Though the partnership has fed my soul, I am not often pressed to the point of having to change core attitudes and behaviors in myself.

The same cannot be said of my present work for Wisdom & Money in its emerging partnership with Be Present, Inc., a partnership that crosses lines of race, class, gender and power. In this work I am challenged on a daily basis to make the cellular-level changes required of me to speak and act with integrity within a culture of collaboration. To meet this challenge, I lean on the support of the Be Present Empowerment Model.