In late May, I was sitting in my shelter-in-place doing my daily headline check when images of fires, protests and police in riot gear flashed across my screen.  The difference between the quiet in my home and what was happening on the streets felt surreal.  Reading the news, I felt as if my mind was floating somewhere above my body.

Feeling disconnected like that is often an indicator that I am having feelings of which I am not yet conscious. So I took some time to explore: What WAS happening in my disconnect?  What was I really feeling?

Fear. That was the first answer.  When I saw photos of fires and police in riot gear, I felt fear.  I am afraid of riots.  I am afraid of what they can do to neighborhoods and I am especially afraid of what our government can do in response.  I am afraid that pandemic + economic suffering + police brutality + systemic racial injustice = massive social unrest followed by military intervention.  That prospect terrifies me.

I stayed with it.  What else was happening in me?

Fear of intense emotion.  One thing I have learned about myself is that when people express passion, anger or rage I often become tense and feel like I am in high alert.  I grew up in an affluent white culture that does not express emotions directly.  In my white culture, you are supposed to hold it together, talk about feelings, write in your journal, and, if you really must, cry in the shower or alone on a beach.  You don’t scream when you are furious or howl when in grief – unless you have completely lost control.  Looking at images of protestors screaming and protestors in tears, my body felt tense and in high alert.

That said, I also know something else.  Thanks to the work of Be Present, I have learned that expressing emotion directly and in the moment that it happens can be lifegiving, energizing and holy.  And so, after noticing that high-alert feeling in my body, I took a deep breath, and kept listening.  What else was happening in me?

I flashed to a moment at a Be Present gathering that I attended a few years back.  One afternoon, a young black man was given space and support to express his feelings.  As he talked about his experience of the violence that is embedded in our culture and directed at men with his skin color, he began to tear up and then sob and then wail.  Other black men came around him and joined him in what felt to me like a collective howl of grief and rage.

Across the room, I was listening attentively.  As the young man started to share what his experience is REALLY like, I could hear that something was shifting in the room.  The emotion was rising.  The voices were getting louder and deeper.  The man’s story was shifting from detached talking about an experience to talking from it.  Something was happening.  I could see that and so my attention leaned in.

And as I listened, I started to cry.  The young man’s experience was horrific.   I thought of my young adult sons.  What if this happened to them?  My chest felt hot as I heard the horror, the anger, the grief, the trauma; it felt as if my heart was literally breaking.  Tears flowed down my cheeks.  I could not stop them.  What the man described hurt my heart.

And yet, at the same time, I knew that the moment was a gift.  I knew that because Be Present has taught me that when there is space, time and support to express the impact of the oppressive dimensions of this culture, people, often, are able to shift their sight, voice, experience.  It is so counter-intuitive to my cultural training to go right into the rawness and reality of the emotion of that, but I have been in enough Be Present rooms to know that the howl is the doorway.  So I did not stop when the tension, that culturally learned fear of black men and raw emotion, surfaced.  I took the breath, opened my eyes to connect with the people in the room, turned back to the men and continued to listen.

And there I was a white woman from an affluent culture – listening to a group of black men who were furious and in deep grief.   That, right there, was a miracle.

That sight simultaneously made me realize that up until that point I had not seen the men.  What I had seen when I walked into the Be Present room earlier in the day was that there were a lot of black men in the room.  Most were new to me and, I hate this, I did not make an effort to connect.  How would I?  What would I, an affluent white woman, possibly have in common with black men?  Reaching out to make a connection felt like a huge chasm to cross.

Yet an hour later, as I listened to the men sharing their experiences and watched what was coming up in me, I no longer felt the chasm.  I felt connection.

When I got to that point, when I was no longer listening and watching through a wall of internalized racism that sees me as separate, that is afraid of black men, that is so deeply in me that I do not even know it’s there, that’s when I could see the men.  Each one.  That’s when I no longer saw “black men,” but each person.

There is so much talk this week about dismantling systemic racism.  I celebrate this incredible awakening that we are standing inside of right now.  AND what I have learned is that a key part of that has to happen is inside of those of us who are white.

AND a piece I am holding is my knowing that it is critical for those of us who are white to do our inner work as we attempt to stand in solidarity and build transformative partnerships.  I don’t mean to fall into guilt or shame.  I mean to recognize and shift the ways that the system of oppression is in our psyches and patterns of behavior.  This is not quick work.  It’s not easy work.  But it’s possible. And it is a critical piece of shifting the system of oppression.

This is what I know. 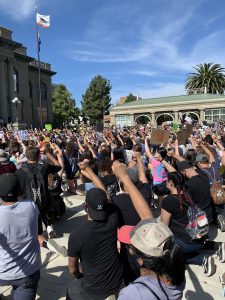 This moment of multiple crises erupting all at once is an opportunity for deep shift; it is a great time for everyone who can to lean in the direction of transformation.  That is what I see happening on streets all over the world.  And a key piece of it needs to happen in and among those of us who are white and wealthy.

If that is you, I invite you to join Steven and me for conversation and exploration about what it means for you to be white and wealthy in this culture.  What is your experience?  What comes up when you attempt to walk in partnership and solidarity?  What do you and we know about moving through those places?

This is work we can do.