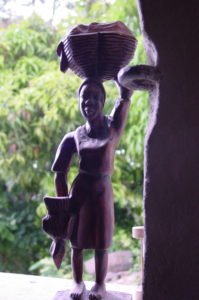 When I was 24, I made the decision to go to Haiti.

The decision came about because of a booklet I picked up at a Ministry of Money retreat in 1995. I was new to looking at money through the lens of my faith then and was grateful to discover a ministry that claimed that, “The journey with money is not about a financial program, but freedom and joy.”

The booklet contained a wealthy woman’s journal from her trip to Haiti. As I read her story, I felt a strong desire to follow in her footsteps; I wanted to see what she had seen and learn in the ways she had.   At the same time, the thought of going to Haiti terrified me.

It was the combination of desire and fear that made me know I had to go.

I was not new to studying injustice when I went to Haiti. After college, I worked with pregnant women in DC who were trying to find work, homes, and healthcare. During that phase in my life, Catholic Worker friends introduced me to the prophetic tradition of Christianity. My friends helped me to understand that Christians are called not just to give charitably, but also to try to shift the injustices of the world. As a young adult, I was not yet clear what was mine to do, but I wanted to open my mind and heart to what is happening in the world. One way I did that was by going to Haiti.

The trip I joined was called a “pilgrimage of reverse mission.”   It was called “reverse” because unlike other mission trips we did not go to build a house or a school. We offered our hands in service where we could, but our primary task was to cultivate a contemplative openness so we could see and hear with our hearts.   There would be plenty of time to respond. This trip was about conversion.

I spent my mornings in Port-au-Prince working alongside Mother Teresa’s sisters in an orphanage. I held babies; I gave infants bottles or fed older children rice and beans; I played with toddlers.   The work, though simple, was difficult for me.   Any time I scanned the room full of sick children and babies with bloated bellies, I felt grief and thought, “Surely this is not what God had in mind.”  An older child who befriended me asked me repeatedly, “Mama, can I go home with you?” I never knew what to say.

In the afternoons, we met with local leaders and politicians. Each gave us their interpretation of what was happening in their country and their ideas about what was needed. During breaks, I read about Haiti’s history a 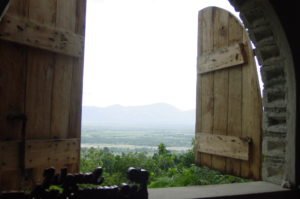 nd learned about the role the United States played in isolating Haiti after the slaves overthrew the French in 1804. Reading about the history let me see my own country’s complicity.

I also came to see that there is a connection between my wealth and other people’s poverty. I saw, for instance, that there is a global economic system in place that benefits people like me and harms others. I do not mean that I intentionally chose to exploit people in Haiti, but I understood that “returns” on mutual funds are often connected to exploitation in places where people are poor. Seeing that connection was painful for me.

The day I left Haiti, I got on a 90-minute flight to Miami. From there I caught a three-hour flight to New York and then drove two hours to my family’s summer home in the Hamptons, one of the wealthiest neighborhoods in the country. In one day, in other words, I went from one of the poorest areas of the Western Hemisphere to one of the richest. It was disorienting and disturbing to realize where I stood in the global family.

What could I do?

My first instinct was to walk away from my world of wealth. I did not want to have more than I need when others are struggling to survive.   I certainly did not want to benefit from systems that create those realities.

What could I do to find another way?

The question was urgent for me. Having held children in Haiti, I could not pretend that I did not know.   Having studied the history of Haiti and the global economic system, I no longer had the luxury of believing that my money is morally neutral or that what happens in Haiti is separate from me.

But where does a rich person go when she has woken up to systems of injustice?

I picked up the phone and called my friend Bryan.

With the support of his friendship and others that I met later through Harvest Time, I began a journey of trying to see if I could transform the flow of money through my life. What would it look like, I wondered, to use money in ways that work for the well-being of all?

This question was Haiti’s gift to me.