Every now and then a phrase captures my imagination and won’t let it go. That’s what happened when I received an email from my friend Steve who spent last week in Rwanda. The email was short, but his voice was full of joy. He reported they’d been “Driving through the Rift Valley with Elephants.”

Driving through the Rift Valley with Elephants.

Now I know that Steve’s in Rwanda, but my first thought was, “Is that the Mississippi 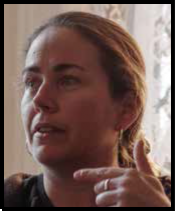 valley you mean?” You see I’ve been driving that valley in the American south for five years now and though I’ve not seen any safaris there yet, I can tell you there are a whole lot of elephants. Right there in the middle of the room. Now in Harvest Time we have a commitment to welcoming elephants. Elephants and money. That›s what we do. And one person, one elephant at a time, things shift. And giggles happen. Just today I was on a call about Mississippi. This was after I was writing about building partnerships of trust. And wouldn’t you know it that Lillie Allen of Be Present asked me a question and all of a sudden there was this elephant right on my lap. Something about power. Something about being afraid people will forget who I am and see me only as the rich, white girl seizing control. Felt like an ache in my heart.

I tried to pretend it wasn’t there as fast as I could. I tried to move on with the call. “What’s next on the agenda?” I said, hoping no one had noticed.

The problem is I’ve partnered with friends who are wildlife experts and there they were in that moment inviting me to study the elephant. “Rose,” Lillie said, in that voice that I knew meant she saw it. “What happened just then?” “It was fear!” the elephant inside my head screamed silently. “Fear I am going to be accused of being controlling or something worse.”

Rather than answer Lillie’s question, I decided to take the long way around. Slowly I explored extraneous details until I was willing to come face to face with the elephant.

Driving through the rift valley with elephants. That’s what we do in Mississippi. Stand right in the midst of the rifts that have torn this country apart for centuries with all those elephants.

I think that’s how Jesus is trying to change things. Not by disappearing the wildlife, but by welcoming them in. I knew that today on that call. Which is why I let my friends and myself see where I am stuck. Because releasing the elephants in the rift valley is the key to being free.