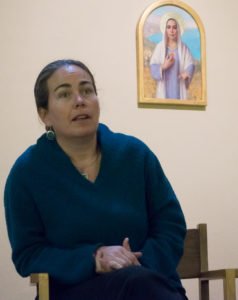 When I went to my first Harvest Time retreat in 2000, the Gospel story about money that I found most challenging was the encounter between Jesus and the rich ruler in Mark 10. One line in particular haunted me: “Go, sell what you have, and give to the poor and you will have treasure in heaven; then come, follow me.” (Mark 10:21) Any time I heard that story in church, I cringed because I felt that Jesus was talking to me.  I knew  was wealthy, even though I lived in a small apartment in an affluent neighborhood. In that context, it would have been easy to look at people around me and avoid the reality of my own wealth.

Except I knew better. I had been to Haiti. I had worked with women who were homeless.   I had spent my college career traveling from Georgetown to a poor neighborhood in Washington DC where I worked as a volunteer, witnessing a dramatic shift in economic realities in the course of two miles. I knew on which side of the money tracks I made my home.

I also understood that I had the privilege of an education at elite schools. And I knew how to move in the culture of wealth because it was where my friends and family lived. Plus, every month financial statements arrived reminding me that no matter what lifestyle I chose, I had more money in the bank than most people my age. When Jesus addressed the rich ruler, I got it. He was talking to me.

Sell what you have. Give to the poor. Come and Follow me.  What did that mean for me?

In 2000, I was in a graduate theology program trying to figure it out. The more I learned about the biblical teachings on economics, the more I heard the prophetic challenge to share and create economic systems that care for all, starting with the most vulnerable.

But what did that mean specifically for me?

I tried talking to my financial advisor about these matters, but understood pretty quickly that she was trained to help me retain and maximize my wealth. When I asked about socially responsible investing, it was clear she did not have the information I needed.

I tried talking to my spiritual director, a social activist priest who chose to live in poverty. For him, Jesus was clear: sell everything. “Everything?” I wondered. “Really? What about my children? What about my long-term needs? What if I do not want to live in poverty?” Besides I was not yet free internally to make those choices, even if I had been clear that’s what Jesus was saying to me.

I needed a different kind of support.

I came to Harvest Time because I wanted to be with people who heard the prophetic call of the Gospel and who understood they had more than enough. I wanted friends who could companion me in discerning a different path. Was it possible to find our way through the eye of the needle? Was the prophetic dimension of the Gospel good news, even for people of wealth? Was it possible for us to participate in the work of social justice, as people of wealth?

That’s what I wanted to know.