Last month I had the opportunity to travel to Rwanda with Steve Bonsey. Steve was invited by his friend, Reverend Philbert Kalisa, to lead a retreat on Wisdom Christianity for members of Philbert’s ministry, REACH which supports people as they walk through a process of forgiveness and reconciliation in order to heal from genocide.  Here is a moment from that journey.

That night, we went to a restaurant, called Heaven. As we pulled up to a white metal gate leading to the parking lot, we stopped to talk to a security guard. I asked him if he was Saint Peter.   I couldn’t help myself.   It took him a moment, but then he laughed. 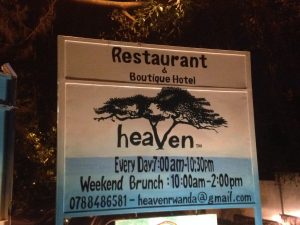 Heaven is an upscale, farm to table restaurant in Kigali. Steve suggested we have dinner there with some friends who also happened to be in Kigali that week. The group gathered consisted of an American non-profit director, a British photographer, the man who had taken us to the genocide memorial earlier in the day, a Ugandan community leader, Philbert, Steve and me.

Over dinner, we took turns describing our work, as a way of getting to know each other.

Kelly, the American woman from Oregon began by talking about her organization, African Road, which seeks to companion change-makers in East Africa.   She told us that she never intended to give her life to leading a non-profit. She was simply offering a few hundred dollars here and there to support her friends in Africa.   When a foundation approached her non-profit with a large gift, she found that she was able to invest strategically in leaders and communities that were seeking to become self-sustaining, rather than supporting short-term solutions. I had met Kelly earlier that day and noticed right away that she seemed joyful; the way people are when they are doing work that is meaningful.

Then Steve stepped in and asked David, the Ugandan man, about his work teaching village banking to people in poor communities. “The first thing I do is help people to change their mindset. People have many ways of seeing themselves as disempowered. They feel like life has not treated them fairly. They say they have nothing. They believe they will always be poor. Before I do anything else, I teach them that the problem is their mindset. I ask people to imagine what they would like to see in their life, to develop a vision. Then we talk about the fact that it’s a journey to get there and we identify steps they can take to move toward their vision.   Next, I ask them to take stock of what they have and we talk about how much a community has when people put their resources together and support each other. But most of all, I help people to change their mindset so they can make changes in their lives themselves.”

Katie, the photographer who was traveling with Kelly, jumped in and told me that when she goes to David’s workshops, she sits in the back and takes notes for herself. “It’s very powerful what he does,” she said.

Katie then asked me about my work at Wisdom & Money.   I told her that the best way to explain was to tell my personal story. I shared that I received a large gift of money when I graduated from college at a moment when I was making an intentional life choice to simplify my lifestyle. I explained that this was the “holy paradox” of my life and how I struggled for many years to figure out how to work with being wealthy as a Christian person committed to social justice. “It was very difficult,” I said, “Until I found friends who understood money as a spiritual question.”   I then explained that I had come to Rwanda because Wisdom & Money is now exploring ways we can support people who are interested in international philanthropy, who are aware that unhealthy power dynamics are often involved and who want to find ways to be in partnership that are rooted in humility, relationship, and mutuality.

Steve picked up the thread and shared his personal experience of coming to Africa for the first time and feeling the temptation to be the “Western savior” who supports brilliant Africans by giving them money, helping them to fix their problems. He described this as a dark romance, based on assumptions that are untrue.   “I can’t fix the problems in Africa,” he clarified. “But I can journey with my African friends over the long-haul as we work together toward shared purpose.”

Steve then talked about his partnership with Philbert and how they have been able to develop a partnership that does not follow the “golden rule” that is common in international philanthropy. “The golden rule,” Philbert explained, “Is that the one with the gold makes the rules.” Everyone laughed.

Steve continued, “Philbert and I have been able to talk openly about money and work together to support reconciliation in Rwanda. The reason I was able to talk about money is because of my connection to Wisdom & Money.”

I noticed then that everyone at the table was leaning in, paying close attention. The group seemed to understand the importance of what Wisdom & Money is trying to do with people of wealth, which surprised me. In the US, I often have to spend a lot of time explaining why working with people of wealth who are looking for deep shift in themselves and with their money is important.

Yet I wondered how this sounded to David who works with people on the opposite end of the global economic spectrum. “What is it like for you to hear us talking about working with wealthy people in this way?” I asked him.

‘It’s exciting,” he said, smiling broadly. He told me that he is often asked by Western donors to offer his opinion about projects in Africa that they plan to undertake. “I feel obliged to tell them that their ideas won’t work. But they don’t always appreciate that. Helping donors to learn how to talk about these dynamics is important.”

After dinner, I got up to use the restroom. On the way, I noticed a small shelf of items for sale. Thinking of my children back home, I paused to take a look. There next to the t-shirts were two beautifully wrapped soaps. A framed description explained: 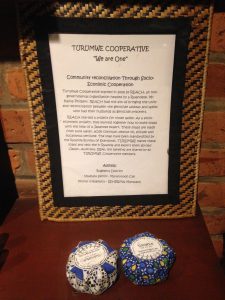 Turumwe cooperative started in 2008, by REACH a non-governmental organization headed by a Rwandese, Mr. Kalisa Philbert. REACH had the aim of bringing unity and reconciliation between genocide widows and ladies who had their husbands as genocide prisoners…As a socio-economic project, they learned together how to make soaps…the benefits are shared by all cooperative members.

I recognized the soaps immediately. A few years ago, Steve and another friend Caroline came to a Harvest Time retreat with a proposal to fund a soap-making cooperative in Nyamata, the village in Rwanda where people were massacred while they sought sanctuary in churches.

Steve and Caroline had visited Nyamata on a recent trip to Rwanda and were moved by the reconciliation work that Philbert was doing there. They explained that people who had been through REACH’s reconciliation training were now forming Unity Groups as a way to continue to practice reconciliation. Some women, Steve told us, wanted to start a business so they could care for all the children in their village. He asked the retreat circle if we would be interested in making a start-up gift, as a group money experiment, to help the women to start a soap making cooperative.

Members of the retreat circle asked questions about the proposal and then we decided to take a break so that each of us could listen to see if we felt led to do this. During the break, I went for a long walk with Helen and John Daly. John had been struggling with an inner block to giving. As we walked through the woods, he decided that he wanted to make the lead gift of $10,000 with Helen. It was a break through moment for him.

When we came back together, John shared his intention. The group quickly came alongside him. Within a few minutes, we were able to commit to gifts totaling $25,000 as a start-up gift for the women in Rwanda. It made me smile to see the fruit of that gift that we made several years ago present now in Heaven.

I noticed Philbert standing next to me with tears in his eyes. “You can’t imagine how this moves me,” he said. “These are poor, rural widows. The fact that they came here and told the managers about their work and convinced them to sell their soaps is a big deal. This really moves me.”